I haven't posted these songs for a couple of years and it's the 60th anniversary of the beginning of the UK charts. The UK charts started in 1952 and the Christmas No1 of 1952 was also the very first No.1 song in the charts.

I love Christmas No1s and have collected them over the years on 78, vinyl and CD.

I've tried to find original video footage where possible but obviously a lot of the TV footage of the early ones has been destroyed or lost.

so here are the next 3 UK Christmas no1s -

Friday here was terrible! The whole of Sheffield had frozen over into an ice rink! I woke up to the news that there had been SO MANY accidents! People falling down, cars crashing, ambulances and fire engines crashing! It was a day to say inside and not go out!

Saturday I was up and out early as I went to a Christmas meet up with my Eurovision friends in Chester. It was a 3 hour train journey each way. I arrived at 12 and had a couple of hours looking around the shops, Chester is very pretty. Then at 2pm I went to the pub we had arranged to meet in and people started arriving. We talked and laughed. There was a secret santa and I picked out a pack of mens aftershave! - well at least it wasn't the pair of massive 'Y' fronts I was dreading! We moved to another pub about 5pm and had a meal. I was quite drunk and I'm ashamed to say the lads did drag me in to a bit of a very funny bitching session. I don't to talking about other people at all and although it was very funny I'm not proud of myself to be honest! They were all lovely on facebook the next day, telling me that I was the least bitchy of the lot of us. I also seemed to have been given the nickname 'The red setter' because of my dyed long red hair! I left at 8pm and got the train back. Steve picked me up in Sheffield at 11pm which was really kind of him as he usually likes to be in bed early!

On Sunday I finally got my Christmas tree decorated, my Christmas cards displayed and the flat looks more Christmasy now.

Last night I went out to a rock/metal concert and was down and dirty with the kids - 'cept not! lol. It was my Goddaughters, boyfriend's, younger brother, Jay's band and three other bands that played. It was a charity event and Jay had organised the whole night as part of his university course exam. So me and my Goddaughters mother and Jay's dad were the only people over 19 in the whole place! Quite funny! But he put on a great event and raised £350 for charity.

Today I was up and out for 8am caught the bus to Hillsborough and I called at my doctors to pick up my prescription. Then I jumped on the tram and went to Meadowhall Shopping Centre. I got there as it opened at 9am and it was so lovely and quiet! Wednesdays at 9 the week before Christmas is always quiet. It starts to get REALLY busy at about 11.30am! So I bought my last couple of presents and was finished for 10.30 so I nipped in a coffee shop and had a cuppa before leaving on the tram just after 11am as it was starting to get busy. On the way home I called in the chemist and picked up my tablets. The only thing I didn't do today that I needed to was to buy a few stamps for sending letters abroad. I'll take a walk to the post office tomorrow.

Tomorrow afternoon I'm going over to my sister's house for the night to see my mom. Mom seems to be very happy and settled living with my sister so it seems to be working out for them. Let's hope this time me and my sister can get through 24hrs without having a row like last time! 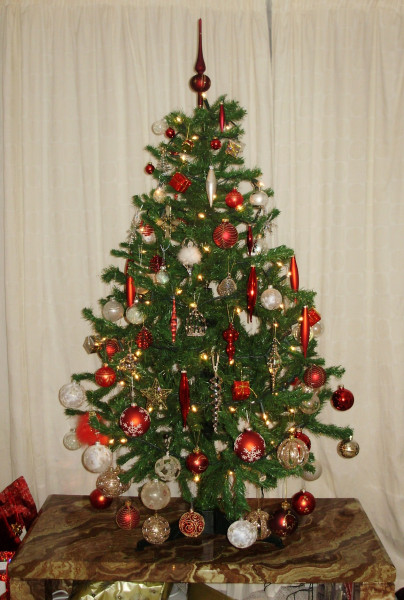 Bauble bought from a glass blower in Fort Augustus, Scotland. 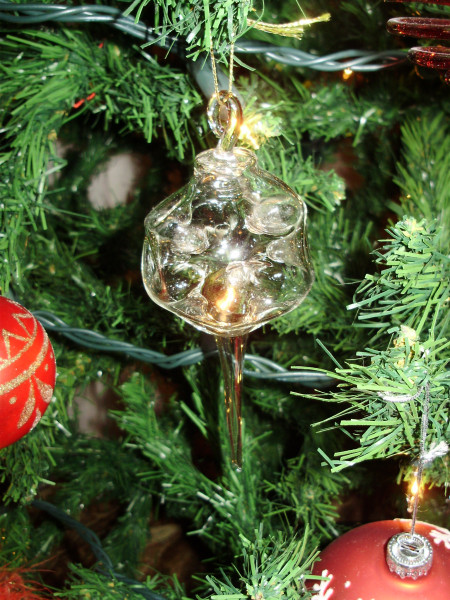 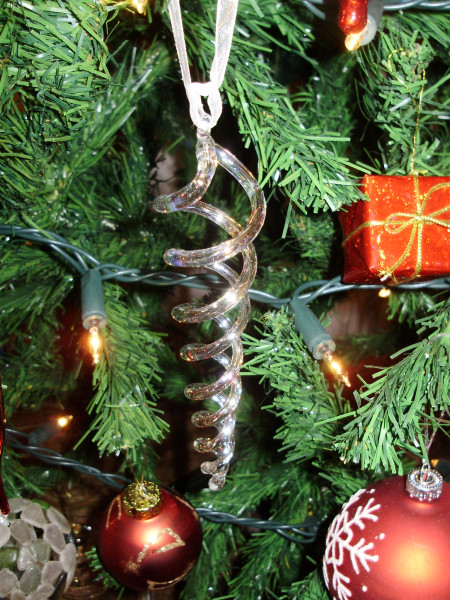 Glass fairy from my friend Christine. 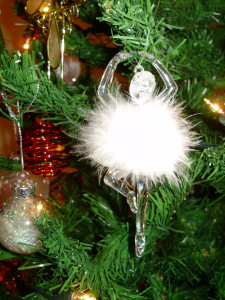 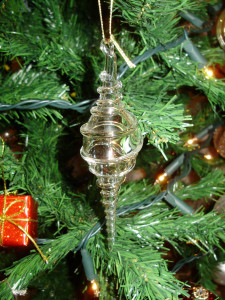 Hand made bauble made of beach glass by a young woman in Falmouth, Cornwall. 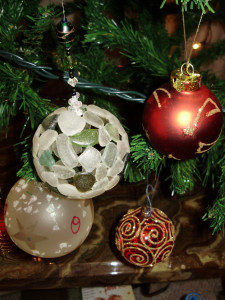 Angel from Woolworths before it shut down :) 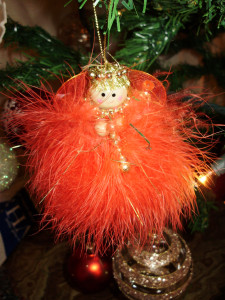 Nativity that Steve bought me when we had been going out a couple of years. He knew I really wanted one and went to a Christian shop to buy it for me. 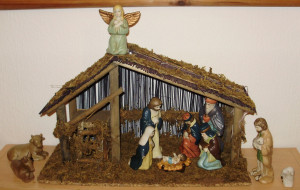