I seem to have been dealing with a lot of workman since Christmas!

The water leak in my spare bedroom from the new tenant's flat above got sorted really quickly - within a couple of days - so didn't cause too much damage. That has now dried up so I just need to give it a tickle of paint, but it's not bad at all.

I've had a huge water leak in my livingroom which was caused by a crack in the walkway above my livingroom window. Because its been raining so hard and for so long this last couple of months, it's eventually made its way down through the pavement and down the wall of my room. I first noticed it on the 1st Jan, but couldn't do anything about it until the council office opened on the 4th! I rang them on the Monday morning and they came and had a look at it in the afternoon. They said they had found a very large crack and so got their bitumen and blow torches out and repaired it. The corner of my room has stopped smelling damp now and I can see it's drying out but I think that it had probably gone on for so many days before it started to show that it might take a while to dry out.

Because of the leak in the living room my artex on the ceiling has a smallish sagging bubble in it which I thought was going to collapse at any moment! I knew that the celings in the flats were tested for aspestos before I moved in and my neighbours had all said that the reports showed that the artex didn't contain aspestos but I have never seen the report. I had seen the report from my old flat but not this one. Anyway I managed to speak on the phone to someone from the council who delt with the aspestos inspection. She confirmed that the ceilings were aspestos free but as the test was from 2005 she asked if I'd like a new full survey done. So I have a man calling next Thursday to do that.

On Tuesday I had a workman here fitting the new hot water and heating meter. Hopefully it should save me some money over the year. I've never minded paying a set amount for my heating and hot water as part of my rent because even though I knew I never had it on in the summer I could have it on for as long and as high as I needed in the winter! But people who have already got the meters are saying that it is saving them loads of money! so we shall see.

At the beginning of December I had workman fitting a new sprinklers system into the flat and as they left one of the workman took my fire alarm off the ceiling and said "you won't need that now". well they later discovered a problem with the plumbing and couldnt connect the system up, leaving me with no fire security for several weeks! So yesterday I had a couple of firemen call around to fit me a fire alarm as the council in partnership with the Fire Service provide them for free.

Then this morning I was waiting for a workman to call around to Steve's flat as his conservatory roof was leaking because of all the rain. The men came and without me saying anything confirmed what Steve suspected - that the lead flashing on his roof had either never been replaced from the summer when thieves got on the roofs and stripped the lead or it had been stripped again!

As I was writing the last post I had to look up the plural of roof as I originally spelt it rooves. I'm sure that's the plural I learned at school! It now doesn't look right to me but grammatically it should be - like hoof/hooves and calf/calves

Well apparently rooves is still correct in the English language but it is so old and unused that it's not considered the standard spelling.

"Rooves as a plural for of roof is dated, but not incorrect. The Oxford English Dictionary lists “rooves” as an alternate to roofs, one of several outdated spellings used in the UK, and in New England as late as the 19th century."

It's interesting that as I am looking this up there are lots of people saying they learned to spell it rooves at school! Also some dictionaries are also saying that hooves is outdated and that most people say hoofs! well I never!

I've received a lovely postcard this morning from

candream who sent it while on holiday in Thailand. 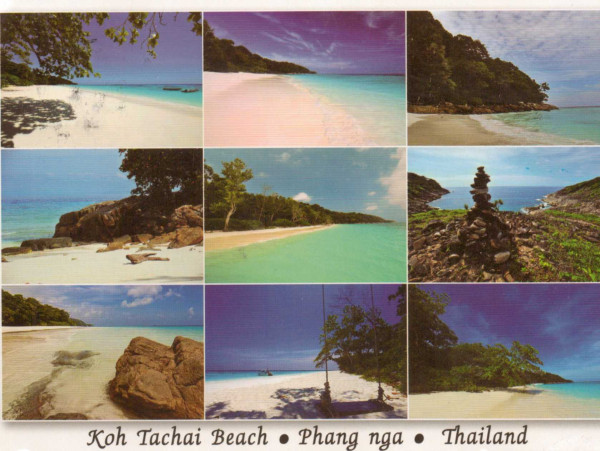 It looks a very beautiful place!

Thank you for sending it to me.
Collapse